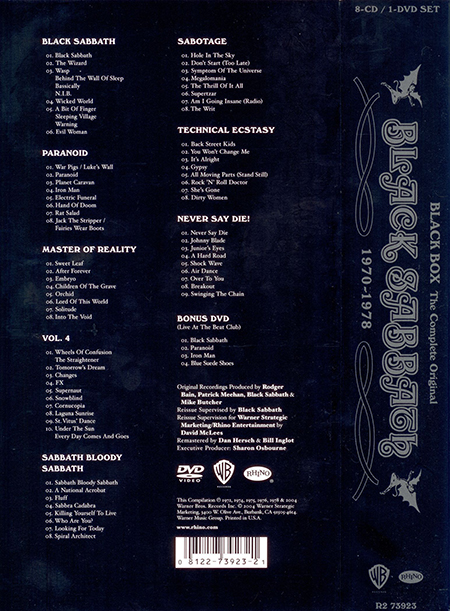 Although Ozzy Osbourne has had a huge cultural impact as both a solo artist and an unlikely TV star, his true legacy lies in the eight albums he recorded with Black Sabbath between 1970 and 1978. Though musical performers in various genres regularly conjured up images of evil (most notably the Rolling Stones on "Sympathy for the Devil"), no act ever actually sounded consistently evil until Sabbath's self-titled first record. The British quartet's sound arrived fully formed, with Tony Iommi's crushing guitar riffs, Geezer Butler's ominous bass lines, and Bill Ward's almost-tribal drumming perfectly complementing Osbourne's haunting vocals.

This gorgeously morbid, pitch-black box set chronicles Sabbath's development, including early-'70s tracks such as the doom-laden "Black Sabbath," the powerful anti-military song "War Pigs," and the fierce "Supernaut," all included on the group's indisputably influential first four albums. Even though the latter half of the set doesn't always rival the brilliance found on the former, the BLACK BOX, as a whole, reveals a formidable musical force that shaped the entire genre of heavy metal and permanently altered the landscape of rock & roll. 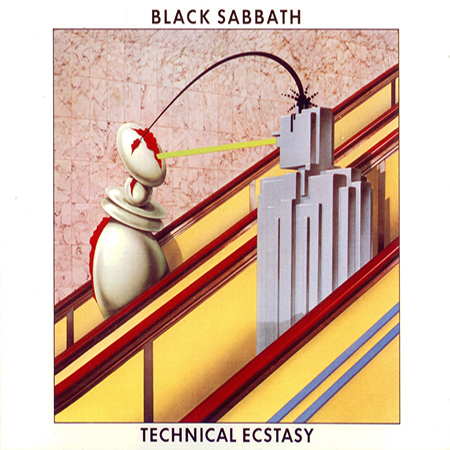 Black Sabbath was unraveling at an alarming rate around the time of their second to last album with original singer Ozzy Osbourne, 1976's Technical Ecstasy. The band was getting further and further from their original musical path, as they began experimenting with their trademark sludge-metal sound. While it was not as off-the-mark as their final album with Osbourne, 1978's Never Say Die, it was not on par with Sabbath's exceptional first five releases. The most popular song remains the album closer, "Dirty Women," which was revived during the band's highly successful reunion tour of the late '90s. Other standouts include the funky "All Moving Parts (Stand Still)" and the raging opener, "Back Street Kids." The melodic "It's Alright" turns out to be the album's biggest surprise -- it's one of drummer Bill Ward's few lead vocal spots with the band (Guns N' Roses covered the unlikely track on their 1999 live set, Live Era 1987-1993).
01. Back Street Kids (3:47)
02. You Won't Change Me (6:42)
03. It's Alright (4:04)
04. Gypsy (5:14)
05. All Moving Parts (Stand Still) (5:07)
06. Rock 'N' Roll Doctor (3:30)
07. She's Gone (4:58)
08. Dirty Women (7:13)